Home › About › About Kona Coffee

Taxonomically classified as “species Arabica sub-species Typica” or more commonly known as Arabica Typica Kona coffee is world renown as a top quality coffee. Kona coffee beans appear as a waxy bluish-green color in its unroasted state. Roasted, the beans are enjoyably smooth to the palate, having a mildly acidic flavor. Kona Coffee is grown on the Big Island of Hawaii, along the western slopes of Mauna Loa and Hualalai. Hundreds of coffee farmers from one to hundreds of acres in size produce a total of about 2,000,000 pounds of Kona Coffee in it’s green (unroasted) form. 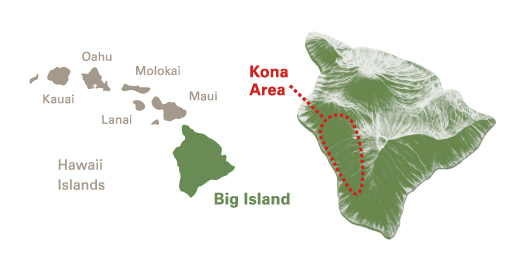 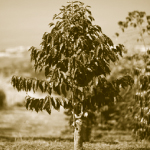 In 1825, King Kamehameha II, Queen Kamalumalu, the Governor General of Oahu Chief Bogi, and others formed a delegation from the Hawaii Islands and ventured to London. It was there that they first tasted coffee. Unfortunately it was also in London where the King and Queen contracted measles and died. Chief Bogi returned to the Hawaiian Islands aboard a British battleship, bringing with him the bodies of the King and Queen. En route to the Islands, the Chief made a stop at Rio de Janeiro, Brazil, where he obtained the coffee trees that spawned Kona Coffee.

Upon his return, Chief Bogi handed the trees over to an ex-West Indies settler, John Wilkinson, who planted them on the Chief’s land in Manoa Valley on Oahu. Unfortunately, during his lifetime, Wilkinson was unable to successfully cultivate the tree for production of its fruits. In 1828, Father Samuel Lugress took coffee trees with him from Manoa Valley to Kona, on the Island of Hawaii, planting them in his yard simply for viewing pleasure. 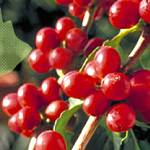 The Kona region provides an ideal environment for coffee cultivation. The region where most of the coffee farms are concentrated commonly referred to as the “coffee belt,” runs along Mamalahoa Highway which cuts across the slopes of Hualalai and Mauna Loa from 300 to 800 meters above sea level. This coffee belt lies on rich, uncultivated lands greatly influenced by the volcanoes that created the Islands. Here the soil contains nutrients necessary for the growth of coffee. In addition, the calm winds, moderate temperature, favorable amount of precipitation, and the temperature differences between night and day create an ideal environment for coffee cultivation.

It is primarily the temperature differences, caused by the warm ocean breezes during the day changing to cool mountain breezes at night that perpetuate the growth of this high quality coffee, especially at elevations which are very near sea level. And of course, the archenemies of coffee, winter frosts, have never been a threat in the warm archipelago of Hawaii.
The coffee tree goes into bloom in spring, producing a multitude of small white blossoms purveying a sweet scent. This occurrence is referred to as “Kona Snow,” and lasts for a short time, three days at most. Following the dropping of the blossoms is the development of the fruit that eventually ripens to the red coffee cherry signifying time for harvesting.

The harvest period ranges from September to February, with each cherry being picked by hand. To produce 1 pound of roasted coffee, about 7.5 pounds of cherry is needed. These handpicked cherries are collected into burlap bags and then transported to the pulping mill. Until the 1950s the industry used donkeys to carry these bags. 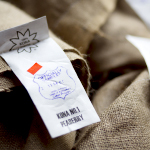 At the mill, the cherry pulp is removed leaving a mucus membrane over beans. The beans are then soaked for ideally no longer than overnight to remove the mucilage, thus preparing them for the drying process.

The demucilaged beans are spread out to dry on a platform (called a hoshidana) in the sun and are raked often in order to spread and turn the wet beans to help them dry evenly and keep them from burning. Dependent upon the weather, this process can range from 5 to 7 days.
As the beans dry in this manner, a parchment skin forms, which is ultimately removed, revealing raw green coffee beans, commonly referred to as “green coffee.” Dry millers then grade the coffee by size and weight while trying to reduce the number of defects or imperfections. The coffee is placed in 100-pound burlap bags and sealed for inspection. At this point, the owner of the green coffee decides whether to have the Hawaii state department of agriculture certify the coffee or not.

Two types of certification are available, a certificate of origin (which just insures that the coffee was grown in the Kona region) and a certificate of quality (which also insures the coffee meets specific criteria for size and number of defects in the coffee). UCC Hawaii always state certifies its green Kona coffee for both origin and quality. When buying Kona coffee, always check for the Hawaii State Department of Agriculture’s Certificate of Origin and Quality. 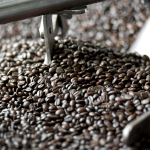 To preserve the balance, flavor, and unique acidity of this exquisite coffee, UCC Hawaii roasts the certified Kona to a “city” roast. Too light a roast can leave the Kona coffee tasting “earthy” and “sour”. Too dark a roast emphasizes the bitter characteristics of the coffee bean and removes some of the body that Kona is known for. In order to insure the coffee reaches this optimal city roast each time, UCC Hawaii uses a color meter with each roasting of Kona coffee.

While generally it is better to grind your own coffee prior to each brew, if you’re plan on using your coffee fairly soon you may want to try our specialty CRACK-U-LATED KONA COFFEE ™. Since heat is one of the enemies of coffee and a regular grinder will produce a certain level of heat as it grinds the coffee, UCC Hawaii uses a specially designed grinder called a “Crackulator” to grind all of our ground Kona coffee. The crackulator reduces the amount of heat in the grinding process compared to a normal grinder thus preserving the quality of the coffee. Additionally, it also removes more of the chaff found on the roasted coffee bean providing a much purer form of Kona coffee.